Introduction to Nepal
Nepal is a small landlocked country located between India and China (Karki and Gurung, 2012). The population of Nepal is extremely poor with 25% of the citizens living on less than $1.25 US dollars daily (Karki and Gurung, 2012). The country is comparable to the size of Arkansas with 140,800 square kilometers of land (Baral et al., 2003). Agricultural land is divided into three regions; the Terai region, the Hill region and the Mountain region with the Terai region accounting for the majority of the agricultural land (Shrestha et al., 2007). Agriculture is particularly important to Nepal as it employs over 80% of the population and accounts for 42% of the GDP (Upadhyaya et al. 1996). 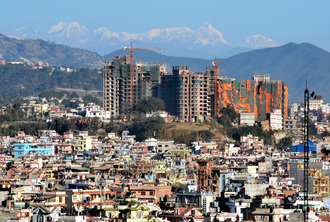 Concerns for Nepalese Agriculture
​There are many problems regarding agriculture in Nepal as of late, with the majority of these problems arising as a result of an increase in population. A larger portion of the population is opting to live in urban regions directly impacting the agricultural sector and the country’s economic stability (Malla, 2008). The increase in population has also resulted in higher emissions of greenhouse gasses with methane emissions rising by 3% a year (Malla, 2008). Furthermore, the overall temperature is also rising with a recorded increase of 1.8 degrees Celsius in the past 32 years (Malla, 2008). In addition to the environmental impacts of a rising population, there has also been an increase in food insecurity as a byproduct of drought, flooding, and nutrient depletion impacting crop production (Palikhe, 2002). Pests and pathogens are able to live longer and can thrive in different climatic regions, for instance, recently it has been discovered that certain mosquito varieties have had an increased ability to live in the Hill region due to favourable climate (Malla, 2008). Nepalese agriculture loses up to 35% of crop production due to pests, which could also be due to insufficient use of resources (Palikhe, 2002).
Photo Source:  Shrestha, M.B. (Photographer). (2010). Urbanization. [digital image]. Retrieved from
​https://sajanashrestha.wordpress.com/2010/12/19/urbanization/

Figure 2: Projected Temperature and Precipitation Patterns for Southeast Asia from 2071 to 2100 (Shreshtha and Aryal, 2011) 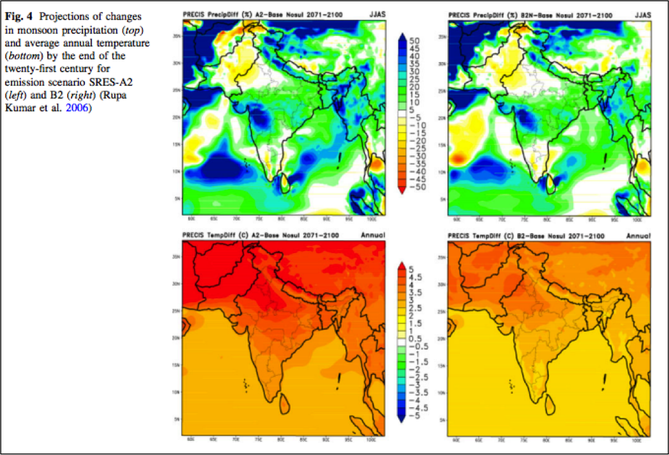 ​It can be observed based on Figure 2 that the average temperature and precipitation is projected to increase significantly in Southeast Asia over the next 100 years (Shreshtha and Aryal, 2011). Temperature could increase by as much as 5 degrees Celsius in direct correlation with precipitation, which is predicted to decrease to 20% annual rainfall in Nepal (Shreshtha and Aryal, 2011). It is necessary that Nepalese agriculture develop methods to combat climate change in the form of drought and pest resistant crops, which is why a Neem oil insecticide could be favourable.
Advantages and Target Consumers for Neem Oil Insecticide
As previously mentioned, this product would be beneficial to the Nepalese for a variety of reasons. Neem oil is able to withstand severe drought, infertile soils and will significantly reduce pests by application (Upadhyaya et al. 1996). The product’s heat resistant capacities would be favourable to increase yields of crops such as rice and wheat, both staples in Nepal, in turn meeting the needs of the food insecure nation. Neem oil insecticides come from a completely renewable source with both the oil and cake from extraction possessing the ability to decompose (Koul et al., 1990). The oil contains polysaccharides, which provide additional energy to increase crop growth and as well can be used to control the transmission of diseases such as malaria or rice seedling infections (Koul et al., 1990).
The target consumers for this product would be rice farmers living in the Terai or Hill regions, as the climate in these regions would be ideal for insecticide productivity as the insecticide can be applied to crops in arid regions with low soil fertility. Pests that are targeted by Neem oil are less likely to develop resistance as the oil contains multiple different control functions to manage pest populations (Govindachari, 1992). A Neem oil insecticide could replace the use of synthetic pesticides that can be toxic to the farmers that work with them (Girish and Bhat, 2008). Studies have shown that synthetic pesticides are the cause of up to 220,000 deaths per year as a result of misuse or dangerous exposure levels (Girish and Bhat, 2008).
Rice Farming in Nepal: Overview
Rice farming is extremely important to Nepalese agriculture as it is the number one agricultural sector and employs a large portion of the population (Upadhyaya et al. 1996). Rice is grown on 1.5 million hectares in Nepal, which is approximately half of the agricultural land and supplies over half of the dietary energy for the population (Dhungana et al., 2004). Additionally, research has shown that the application of Neem oil insecticides on rice crops has increased yields by 22 to 24% (Saxena et al., 1984). Neem also possesses nitrogen fixation properties with studies proving that rice crops applied with Neem showed a 10 fold increase in nitrogen fixation, a property that is ideal for nutrient accumulation in the roots (Saxena et al., 1984; Koul et al., 1990).